Netball shoes (also known as court shoes or cross-trainers) are designed specifically to cope with high force from the frequent ‘stop-and-start’ and side-to-side motion that is required in netball.

A standard running shoe does not have the features required to support side-to-side movement, nor the durability to withstand high force on a court surface.

This means that if you wear a running shoe to play netball, you are much more likely to suffer injuries (from lack of adequate support) and your shoe is likely to wear out much faster. The image to the right is a great example of the added support a netball shoe provides to the ankle.

Features Of A Netball Shoe

Outsole: For netball the outsole should be made from a firm rubber that is wrapped around the side of the shoe. This enables the outsole to be more durable on hard courts and to prevent injuries from frequent side-to-side movement.

Midsole: This is where most of the cushioning and mid-foot stability is located.

Heel counter: This refers to the firm material at the back of the shoe that wraps around your heel. This is important in any good shoe, but especially for the netball player because this is the part of the shoe that gives you a strong ankle support. 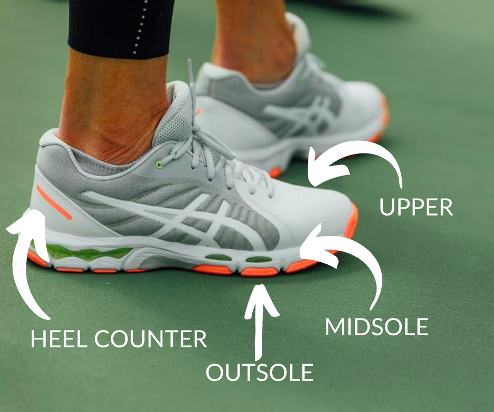 Upper: This refers to the material that covers the top of your foot. The material should be firmer or more tightly stitched around the side of the shoe to provide support for side-to-side movement.

If you are to wear a shoe designed for indoor netball to an outdoor netball court, the shoe is expected to wear out much faster.

You can book an appointment online to come and see us at: https://www.epodiatry.com.au/make-an-appointment/or give reception a phone call on (02) 4367 0177